20 Ways to Beef Up Your Alzheimer’s Knowledge 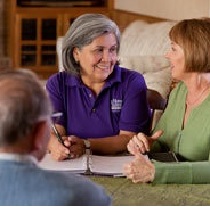 Like any other day, Jake took a break from his shift at the warehouse to have lunch at the diner around the corner. Sally, the server, had come to know him quite well. She knew, for example, that Jake often took time off work to care for his dad, who had Alzheimer’s disease.

“How’s your dad doing these days?” Sally asked as she poured him a cup of coffee.

“Ah, you know,” Jake said, shaking his head. “He drives me nuts. Yesterday I caught him outside trying to fix the riding lawnmower. I shouted at him, ‘Dad! Don’t you know better than that?’ He nearly took a finger off. I don’t get it. He always had such common sense, but now he does such dumb things.”

“He can’t help it, Jake,” Sally replied. “I read just the other day that Alzheimer’s actually makes the brain shrink. It affects the area that allows us to make good decisions. Maybe your dad’s brain has shrunk.” Jake was amazed. He had no idea there might be a physical cause for his dad’s declining decision-making skills. Sally directed him to the interactive brain tour at Alz.org , which Jake reviewed later that evening. He came away with a better understanding of why his dad was behaving irrationally. He felt more empathetic toward his father, too.

The simple acts of educating yourself and others can have a profoundly positive effect on anyone coping with Alzheimer’s disease. To participate in World Alzheimer’s Month, devote a few minutes today to expanding your own knowledge of this condition and share your expertise with someone else. Until there’s a cure, knowledge is power over this disease.

20 Ways to Beef Up Your Alzheimer’s Education

1. Bookmark the Alzheimer’s Learning Day website for a plethora of educational resources
2. Read about dementia symptoms and stages
3. Get the latest facts and figures on Alzheimer’s
4. Learn about reducing your risk and read about the recent science updates
5. Get quick tips on how to cope with common dementia behaviors
6. Watch a video on Understanding Alzheimer’s and Other Types of Dementia